This year, the Virginia Institute of Marine Science Day was held virtually. Virginia Sea Grant’s digital storyteller Aileen Devlin answered questions about visual science communication and her career path. You can watch a recording of her Q&A session and read some of her answers here.

My story is a little different because I started my career in the news world. I was an art major with a concentration in photography, I worked for the newspaper at the college I went to, and that was the beginning of my documentary/journalism world. Then I got a job out of college at the newspaper and I was there for about five years. When I needed a new challenge, so I came to Virginia to a bigger area, bigger newspaper, and worked at that newspaper for a while.

I started realizing that I wanted to shift my focus into doing more environmental and nature-based journalism. I took me a while to figure out how to make that shift. So, I just was looking around and found Virginia Sea Grant, and it seemed like the perfect fit. And they love me and still love me to this day, which is great.

My title is digital storyteller, so I do photo, video, social media, anything like that for Virginia Sea Grant with the researchers, professors, graduate students that we fund through our organization. We are a NOAA-based organization, by the way.

With another person on my team as a staff writer, we’re a tag team–I do the visual, she does the writing. We go out with students, researchers, and document what they do. We prepare articles, we do online presence for them, it’s kind of a mixed bag of things. We provide interview skills for them, social media skills, and really just great stories and visuals for the researchers to use for presentations or anything to talk about their work. It’s kind of a group effort—it helps everybody out.

What’s your favorite part of your job?

Definitely the field work. There’s nothing better than going out with everyone and seeing what they’re doing. I think that’s important to note: I was not a science background. I was an art major that had very little schooling of science, so it was a weird transition and I feel like a little bit like an oddball. It’s really amazing to go out with researchers and scientists, learn what they’re doing, and try to help communicate it to people who were like me. Everybody’s so fun when they’re in the field. That’s definitely the best part.

Could you walk us through what a typical day might look like for you? I know that your job changes day to day, but some idea of a typical, how that goes.

Yeah, it does vary day to day. If we have field work, it means getting up early, like the crack of dawn with the scientists, on boats all day, getting dirty. I have to protect all my gear. This is what I’m carrying all day with me on a boat, so anything I can do to prepare, keep that stuff safe.

We’d go out with them, document what they do, learn about what they do, which are long days but it’s totally worth it. Then other days, I’m sitting in an office, I’m editing photos, editing videos, working on social media, monitoring social media–to see if there’s anything that I can share that’s relevant to what we do here. Then we also do other events, anything that could be policy worthy. So, it’s kind of a mixed bag. It’s really great, it’s good for me, because I kind of like the change.

What are some of the favorite research stories that you’ve worked on and why were those so fun to be a part of?

A really cool fellow’s story is Cassidy Peterson, she’s at VIMS, the Virginia Institute of Marine Science. She studies sharks, so I went on a long-line fishing boat with her and the VIMS crew and that was like, a 12 or 14 hour day. We hung out, tagged sharks, and that was just like nothing I’ve ever experienced. I’ve never been on a boat like that, never been that close to such a large marine animal caught right out of the water, so that was amazing.

We do a lot of projects with coastal resilience as well. So, I’m thinking of this project that we did with Old Dominion University, which was showing the high tide for future dates of 2050, 2080, and 2100. It was projecting where the sea level rise and high tides are going to be at those times. We followed the group with ODU and citizen scientists, who went out and helped map neighborhoods where the high tide was. It’s just a nice way to educate people to say like, “Hey, this is what’s coming, we need to be more prepared. We need to keep working toward being more resilient as a coastal community.” There’s a lot more, but that’s the top two that come off the top of my head.

Oh, yeah. That’s my favorite thing to do. Just throw me in anything and I’ll go into it. I keep waders in my car, I keep rain boots in the car—anything I need that I can get in the water, I am there. I’m very careful with the big boys (holds up two DSLR cameras). They’ll go in the water with me, but very shallow waters. And if it’s anything else, I’ll use a GoPro or something that’s water-protected, and I can dump that in the water. So yeah, absolutely, in the water, all day.

What is your advice for someone that wants to eventually get into science communication?

It’s kind of been a process for me to understand how important it is. I was doing it back in the day, but I never realized what a tool it is. Just social media for example, is such an important tool. It’s funny, because social media is really good at little niche communities. The science community has a huge presence on Twitter, and everybody’s really amped up about what people are studying and they want to share it. I think even if it’s just shared within the science community and it can go viral or whatever, it’s reaching more and more people. It’s crazy to think that social media can do that, but it is and it’s really important. I say, if you’re doing cool stuff, share it, put it on your social media, have your friends share it because the more people to know, the better.

How did you learn to tell stories with pictures instead of with words?

I’ve always done photography, and working in the photojournalism world and the news world, that’s everything for me, is just trying to capture the one photo that tells the story without any words. You don’t have to read the story, you kind of know what’s going on in that image. I think it’s more important than ever to be doing this kind of stuff. If people aren’t seeing the effects of sea level rise or the effects of red disease on American eels, then they’re not going to realize it’s such a problem. It’s only going to be a problem to a couple people, and then it’s going to be harder to get results, answers, or get it fixed.

So, I think it’s important for people to see these stories, these issues, and doing it visually, it’s just a different way to do it. And it’s important, because people like me who are visual, it helps. You know, maybe you don’t understand the science terminology quite as much, but seeing it visually, you might be able to understand it a little bit better.

What is an unexpected part of your job that you wish more people knew about or appreciated?

Sometimes I think people have no idea what I do, which is funny, but some people are like, “So what do you do, just take pictures all day?” And I’m like, “Well, kind of, yeah, I do, but there’s a lot more that goes into that, and there’s just a lot more.”

Say for example, you found something really sad, [like] hundreds of fin sharks, are you sad about that event happening, or is there some satisfaction because there’s the picture opportunity there and you get to share it? What does that process feel like, I guess, from your side?

Yeah, this is a really complicated question. It reminds me of when I worked with the news, and, sad things happen all the time and there’s a back-and-forth battle with ethics and that kind of thing. I will say, ultimately, making sure I’m still a decent human and not exploiting anything or trying to cause any negative reactions whatsoever. But, I think it is more important that people see it, because that can spark the change. This is how I feel, not saying this is how everyone thinks, but I think if we don’t see it, then it’s easier to ignore. Things might be able to change a little faster or things might be able to happen if you can visually see it or hear about it through an article.

What do you think are the most important skills for a science communicator to have?

I think being quick on your feet, because when you’re out in the field and you have a lot of stuff on you, and it’s expensive, you need to be careful. And you have to have kind of a solid stomach. You can’t get too queasy or too weird with anything. You have to be down for whatever, because you never know what’s going to happen. I think that’s probably one of the best things.

Do you have to have a strong science background to do your job or to do something kind of like it in your field?

I did not have a strong science background. I was an art major with a concentration in photography, and then my work experience was all journalism. I started getting experience in the science world with journalism, because we would cover environmental stories or science stories and that’s where I realized I really enjoy doing these types of stories. Out of everything, I wanted to do those all the time. That was my transition to realizing, “Okay, I think I can slowly transition out of doing ‘everything’ journalism into doing one focused field and I can still make a career out of it. I’m also doing something that I’m a little bit more passionate about and I feel strongly about.”

I don’t think you have to have a strong background in science to work in the world, because there’s a lot of jobs in science that aren’t being a scientist. Even if it’s not photo or video, there are people who work on social media, other marketing jobs, writing—which is another huge part of science communication. If you’re passionate about nature and marine science, I just want to emphasize again, there are so many careers in marine science that don’t require the perfect science background or something like that – I’m a fine example. 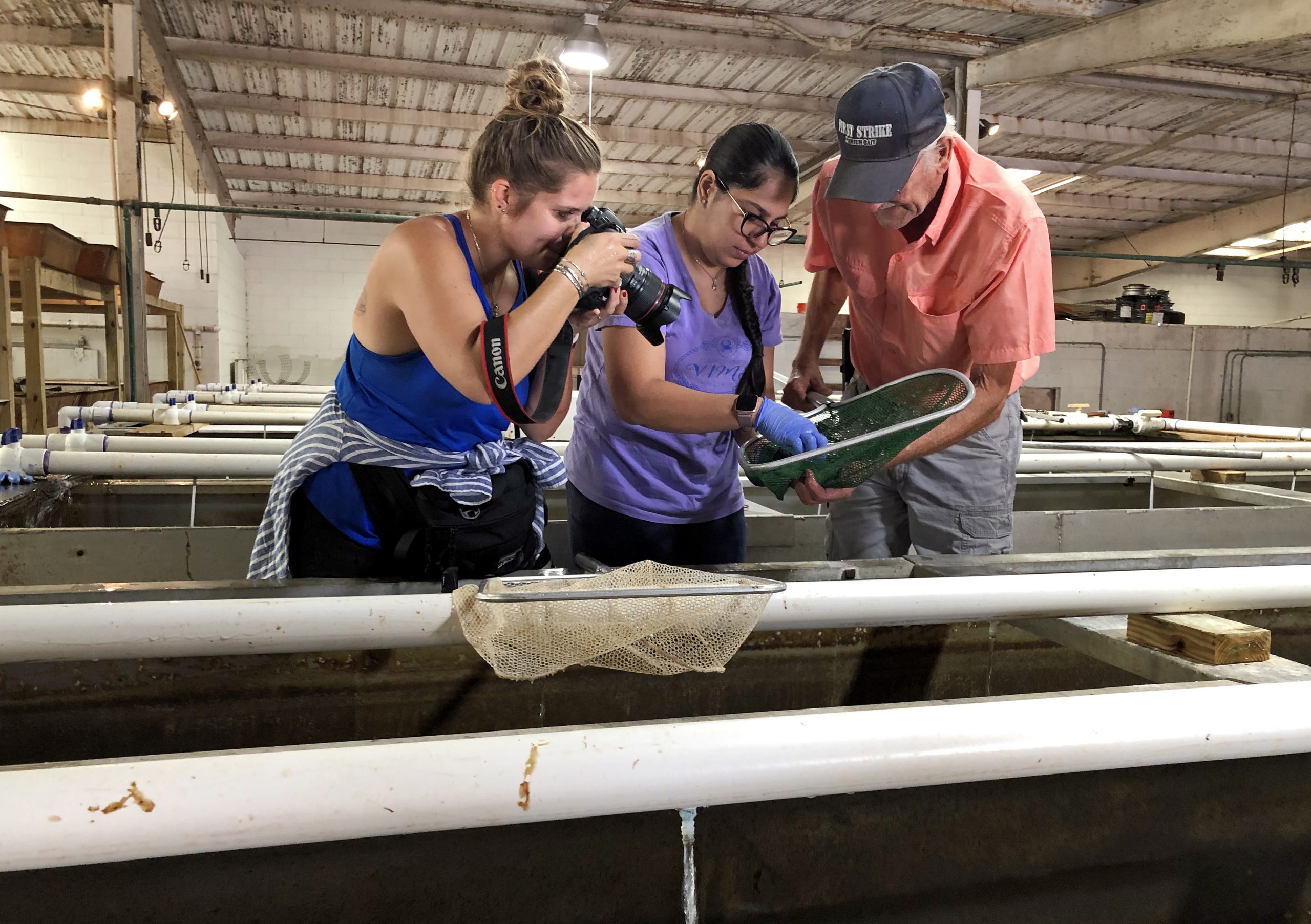 “It's really amazing to go out with researchers and scientists, learn what they're doing, and try to help communicate it to people who were like me,” Devlin said.