“Coastal Flood Statement: Portions of the tidal Potomac river basin are expected to experience flooding effective until…” The flood alert lights up on thousands of smartphone screens across the region. But behind the flood notification are research teams who provide accurate and timely forecasting.

The National Weather Service monitors the water levels around the Chesapeake Bay every day. Based on computer models’ projections for the next three days, forecasters issue flood alerts when water levels are expected to exceed certain levels.

Tidal influence is fairly straightforward to predict, but other more complicated factors, like local wind conditions and runoff from urban areas, also contribute to the total water level. Currently, the National Weather System models don’t directly include these factors, but in the Washington, D.C., area, they can increase the total water level by as much as 26 percent.

A model that measures up to floodwaters

In the National Capital region along the Potomac River, local winds, rainfall and runoff from surrounding cities, storm surge, and tidal changes from the Chesapeake Bay all influence water levels. Each of these can cause higher water and affect flood forecasting, but most models don’t combine all of these factors together, said Arslaan Khalid, a Virginia Sea Grant Graduate Research Fellow and recent engineering graduate at George Mason University’s Flood Hazards Lab.

“If you’re not combining all of these processes together, it’s difficult to forecast something because you’re missing a major component.” Khalid said.

Khalid’s research focused on combining local wind conditions and water coming from tides, storm surges, rainfall, and rivers. Each of these contribute the total water level differently, and researchers must account for each factor’s influence in the mathematics of the forecasting models.

To produce accurate forecasts, researchers look at an ensemble of different predictions to understand the full range of possible conditions and which are most likely, explained Celso Ferreira, an associate professor at the GMU Volgenau School of Engineering.

“Moving up the river, how much rain is there going to be in the next three days, and where is that rain is going to be? There’s a lot of uncertainty in precipitation forecasts on their own,” Ferreira said. “There are a lot of pieces we’re trying to glue together, so if we can run our system many times with all ranges of scenarios, we can achieve a more probabilistic outcome.”

The most likely scenarios were incorporated into a program called iFlood, the lab’s integrated system that produces an 84-hour forecast. Khalid ran individual models to simulate different scenarios of river flows and rainfall and used the results to create a forecast from iFlood that could be sent to the NOAA and National Weather Service Baltimore/Washington Forecast Office.

Local wind conditions and runoff from urban areas in the Washington, D.C., area can increase the total water level by as much as 26 percent.

The validation process shows the researchers how different conditions—like local winds from a certain direction—contribute to total water levels, and then they adjust the iFlood system accordingly.

The iFlood system covers the tidal region of the Potomac River, including Virginia’s portion of the shoreline, and the Washington Metropolitan region, including coastal areas of Washington D.C., Alexandria and Arlington in Virginia.

To improve the system, the research team validated iFlood forecasts by comparing real-time conditions to what their system predicted. A network of inexpensive water level sensors installed by the team at multiple locations around the Potomac provided information about changes in total water level throughout the day. They also used historic conditions to test the model, like the conditions during Hurricane Dorian in 2019.

The validation process shows the researchers how different conditions—like local winds from a certain direction—contribute to total water levels, and then they adjust the iFlood system accordingly.

While adjusting official guidance can be a lengthy process, the experimental iFlood research system allows the Flood Hazards Lab to make updates quickly from day to day. Khalid collaborated with the senior hydrologist at the Baltimore/Washington Forecast Station, to ensure the iFlood forecasts are useful to the NWS. The iFlood system sends information to the Baltimore/Washington Forecast Station every six hours, and sometimes iFlood guidance is used for the official NWS forecasts.

Forecasting further into the future

During his fellowship, Khalid also worked on a more experimental portion of flood prediction: extending how far in advance water levels can be predicted, or the “lead time” before the flooding occurs. Right now, the National Weather Service issues a three-day forecast, but Khalid looked at how accurately predictions could be extended to a week or even a month in advance.

As part of his research, Khalid tested whether they could create forecasts as far as 30 days in advance of flooding. Khalid found that the integrated iFlood system was able to provide reasonable flood predictions up to two weeks in advance, but still underestimated total water levels during hurricanes and severe weather.

“These water level forecasts are sent to the National Weather Service to support the final decisions if some area is going to be flooded,” Khalid said. 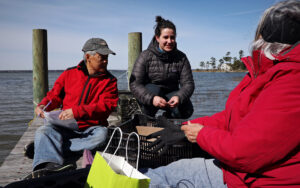