Blue catfish are the largest species of catfish in North America. They can live as long as 25 years and can grow to be larger than 100 pounds. In 2011, Virginia researchers reported that blue catfish accounted for as much as 75 percent of the total catfish weight in some rivers—that’s impressive given that blue catfish are not native to the area and were introduced less than 50 years ago.

With blue catfish proving their ability to thrive in the Chesapeake Bay region, fishery managers have begun to question their impact.

“Blue catfish are generalist feeders—they eat whatever is around,” including native fish and sometimes blue crabs, says researcher Corbin Hilling. As a Virginia Sea Grant graduate research fellow and Virginia Tech graduate student, Hilling is studying blue catfish populations in several tidal rivers connected to the Chesapeake Bay. He will use mathematical models to show the ecological impact of blue catfish and the effects different management policies might have in the future.

A fish’s age and size are important factors to consider in Hilling’s model.

“Fish are limited in what they can eat by the size of their mouths,” Hilling says, adding that they often compete with native fish for the same food sources—and even eat the native fish themselves sometimes. “At small sizes, they’re eating a lot of invertebrates and plants, and as they get bigger, they’re more likely to eat other fish.”

A highly adaptable and hardy fish, the blue catfish was first introduced in the Chesapeake Bay area in the 1970s. Although they prefer freshwater, these fish can survive in the variety of salinity levels, habitats, and water temperatures present in bay tributaries.

Hilling’s research will focus on the James, Rappahannock, and York, especially the Mattaponi and Pamunkey rivers. According to research from the Virginia Department of Game and Inland Fisheries, blue catfish are most abundant in these rivers. Yet, each river’s population of blue catfish is unique: The fish were introduced to these rivers at different times, and each catfish population has different growth rates and feeding habits.

Just as diverse as the catfish populations are the anglers trying to catch them.

“Some recreational fishers are looking for big fish, but that’s not the only objective in blue catfish fisheries,” Hilling says. “You have other fishers that are more harvest-oriented—they are less interested in the size of fish they’re catching. They’re targeting fish to put in the frying pan. And then, of course, there are commercial fishers looking for fish to sell who have specific preferences also.”

Management strategies for blue catfish attempt to balance fishing trends and the interests of fishers against the environmental impacts of these fish. The interests of management and fishers, however, are not always in conflict.

“If you manage the fishery to control or reduce the size of the blue catfish, you reduce that fishery, but you might increase another fishery, say bass or shad or whatever,” said Kurt Stephenson, Hilling’s mentor and a professor of agricultural and applied economics at Virginia Tech. “It’s trying to get a handle on the recreational and commercial demand of various species, including blue cats, that are managed by blue cat fishery policy.” 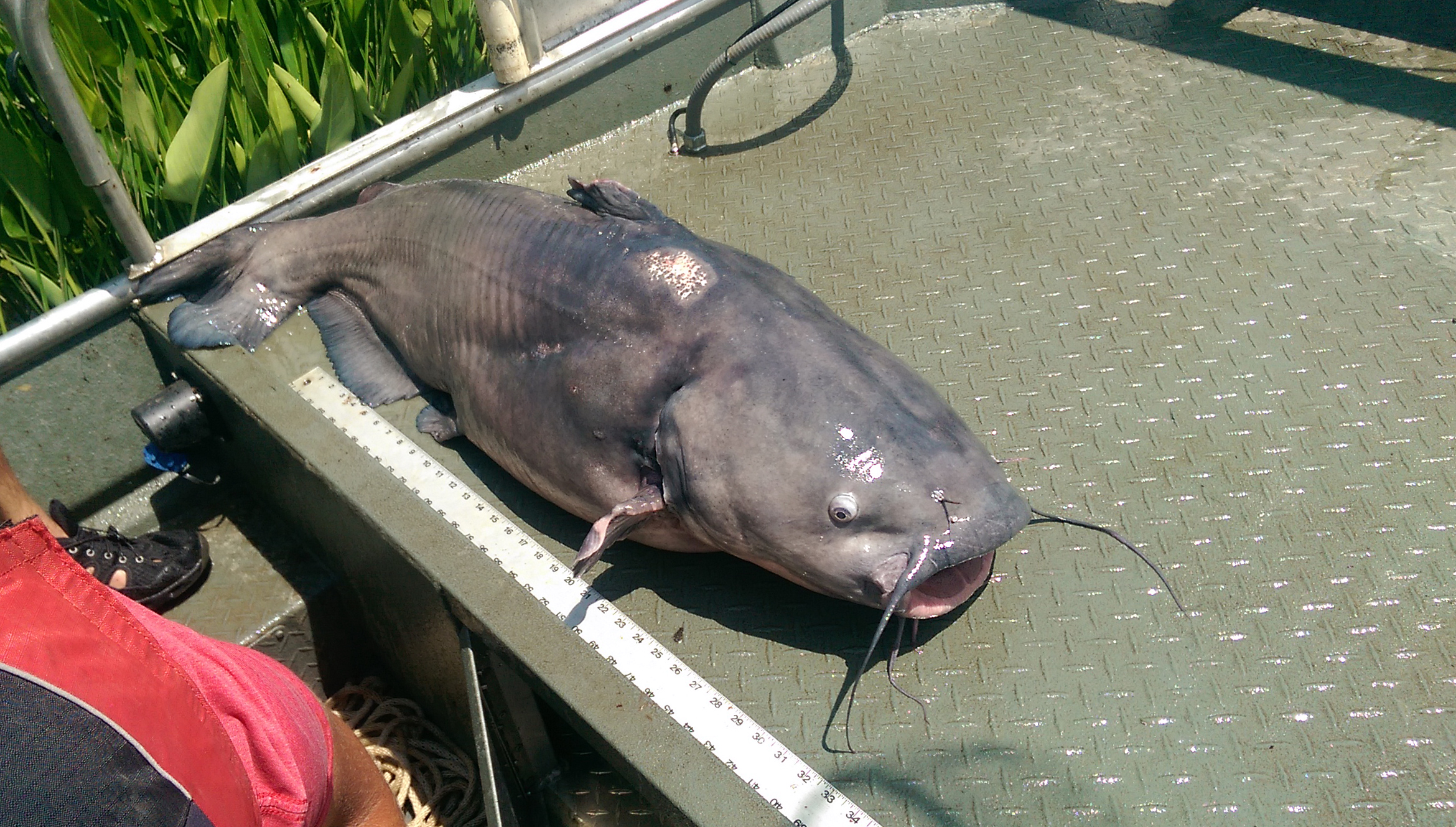 A highly adaptable and hardy fish, the blue catfish was first introduced in the Chesapeake Bay area in the 1970s. Although they prefer freshwater, these fish can survive in the variety of salinity levels, habitats, and water temperatures present in bay tributaries.

Right now, Hilling is examining the different datasets available, including information such as population abundance, natural mortality, and growth rates, to see how they could be useful for his work.

His model will also incorporate former VASG fellow and Virginia Tech alumnus Joe Schmitt’s research about the feeding habits of blue catfish. Schmitt’s investigation of blue catfish stomach contents will help Hilling’s model predict how decreases in blue catfish populations might reduce their predation on these other fish species.

“I’m going to look at how populations and size structure have changed over time, and then I’m going to use that to run some simulations and look at how the population will likely change if managed different ways,” Hilling adds. “From there, we can input Joe’s data and estimate what the consumption of various creatures would be under different management strategies for blue catfish.”

As far-reaching as the blue catfish have become, they impact more than just the environment. Four organizations are responsible for overseeing the blue catfish and their effects: the Virginia Department of Game and Inland Fisheries, the Virginia Marine Resource Commission, Fish and Wildlife Service, and the National Oceanic and Atmospheric Administration. The issue also touches many more commercial and recreational fishers in the Chesapeake Bay area.

“Everyone has a stake in this at some level,” Hilling says. “I’ve talked to a lot of folks who like to fish for largemouth bass who will catch blue catfish and don’t want to. It’s just kind of interesting how these fish affect a lot of different people, either indirectly or directly.”

With blue catfish proving their ability to thrive in the Chesapeake Bay region, fishery managers have begun to question their impact.