A message to the VASG community about COVID-19

Chefs and culinary professionals play an important role in sharing the story behind the seafood they serve, according to Dave Rudders, associate director of the Marine Advisory Program at the Virginia Institute of Marine Science (VIMS).

“We’re trying to tell a story, and it starts with biology, but it ends with you all,” Rudders told chefs at the 28th annual Chefs’ Symposium. “You all are part of the narrative that gets told to the general public. Think of us as a resource for how you might take that story to customers.”

More than 100 culinary professionals from throughout the state gathered for the 28th annual Chefs’ Symposium March 10. The symposium provides updates on seafood science from researchers, and includes culinary demonstrations for chefs, students, and others in the food industry. The event is hosted by the VIMS Marine Advisory Program, and co-sponsored by the Virginia Chefs Association and the Virginia Sea Grant Marine Extension Program.

As seafood consumers become more interested in the source and sustainability of their seafood, restaurant patrons turn to servers for information about the food they order. Bob Fisher, a fisheries and seafood technology specialist at the VIMS Marine Advisory Program, discussed an ongoing project to equip servers and chefs with information about the seafood products they serve.

“The fishing industry as a whole relies on these interactions,” Fisher, a Virginia Sea Grant extension agent, said. “All these people make their livelihoods from decisions made at your restaurants.”

Virginia leads the nation in hard-clam production, which was valued at $37.5 million in 2017. Richard Snyder, director of the VIMS Eastern Shore Laboratory, provided an overview of the cultural significance of hard clams in Virginia, including their value in Native American art, the transport of “cherrystones” to New York in the 1800’s, and current practices of the aquaculture industry.

“We aren’t the only thing that likes to eat clams,” Snyder said, adding that the aquaculture nets protect clams from the whelks, skates, and seagulls that feed on clams.

After learning how oyster genetics and aquaculture gears can contribute to a quality product, and the different flavor profiles of oysters across Virginia, oyster shucking champion Deborah Pratt gave a shucking demonstration, followed by a taste-testing of region six oysters.

“I see a lot of white jackets,” Pratt said. “You know why I like white jackets? You all like to shuck oysters, but you do it the wrong way. I’m going to teach you.”

An emerging aquaculture technology, aquaponics, combines fish aquaculture—often species such as tilapia, trout, or salmon—with the hydroponic production of leafy greens. Setareh Shiroodi, a postdoctoral associate in seafood safety at Virginia Tech’s Seafood Agricultural Research and Extension Center (VSAREC), described the different types of aquaponics systems and their advantages, such as efficiency and sustainability. She also discussed food safety measures for aquaponic fish and produce. Shiroodi said Virginia’s chefs may see more produce and fish from aquaponic farms in the near future.

When most people think of shrimp—the most popular seafood in the United States—they think of shrimp from the Carolinas, Georgia, and the Gulf of Mexico. VIMS Senior Research Scientist Troy Tuckey discussed how the number of shrimp in the Chesapeake Bay has increased in the past decade, leading to a trial shrimp fishery the past three years.

So far, the shrimp trawls in the Chesapeake Bay produce about 10 pounds of shrimp for every pound of bycatch—substantially better than shrimp trawls in the Gulf, which  The Virginia Marine Resources Commission has not made a decision about commercial shrimp fishing yet, Tuckey said, and it could take a year or longer before the shrimp fishery is established in Virginia.

“Will there be Virginia shrimp on your menu?” Tuckey asked. “It’s a real possibility.”

Culinary students from the Colonial Williamsburg Apprenticeship Program put their seafood skills to the test in an afternoon cooking competition.

The shrimp cooked in an afternoon cooking competition between Colonial Williamsburg Apprentices wasn’t from Virginia, but local Chef Winslow Goodier of Nuttall’s Store in Gloucester demonstrated how using fresh seafood ingredients improves dishes. While making oyster ceviche, Goodier shared tips he learned over the course of his culinary career, and also offered the perspective he gained while working on the water for three years.

For culinary students in attendance—some of whom had not yet prepared seafood—the Chef Symposium offers a glimpse of the science behind the fish and shellfish they will learn to prepare.

“I was coming down here with a busload of kids one time, and we came over the bridge, and one student looked at me and said, ‘Chef, is that the ocean?’ and I said, ‘No, it isn’t,’” Goodier recalled. “Here was someone from Richmond who has never seen the ocean, so how can you expect them to know about seafood? Hopefully this opens their eyes to some things they may not have known.” 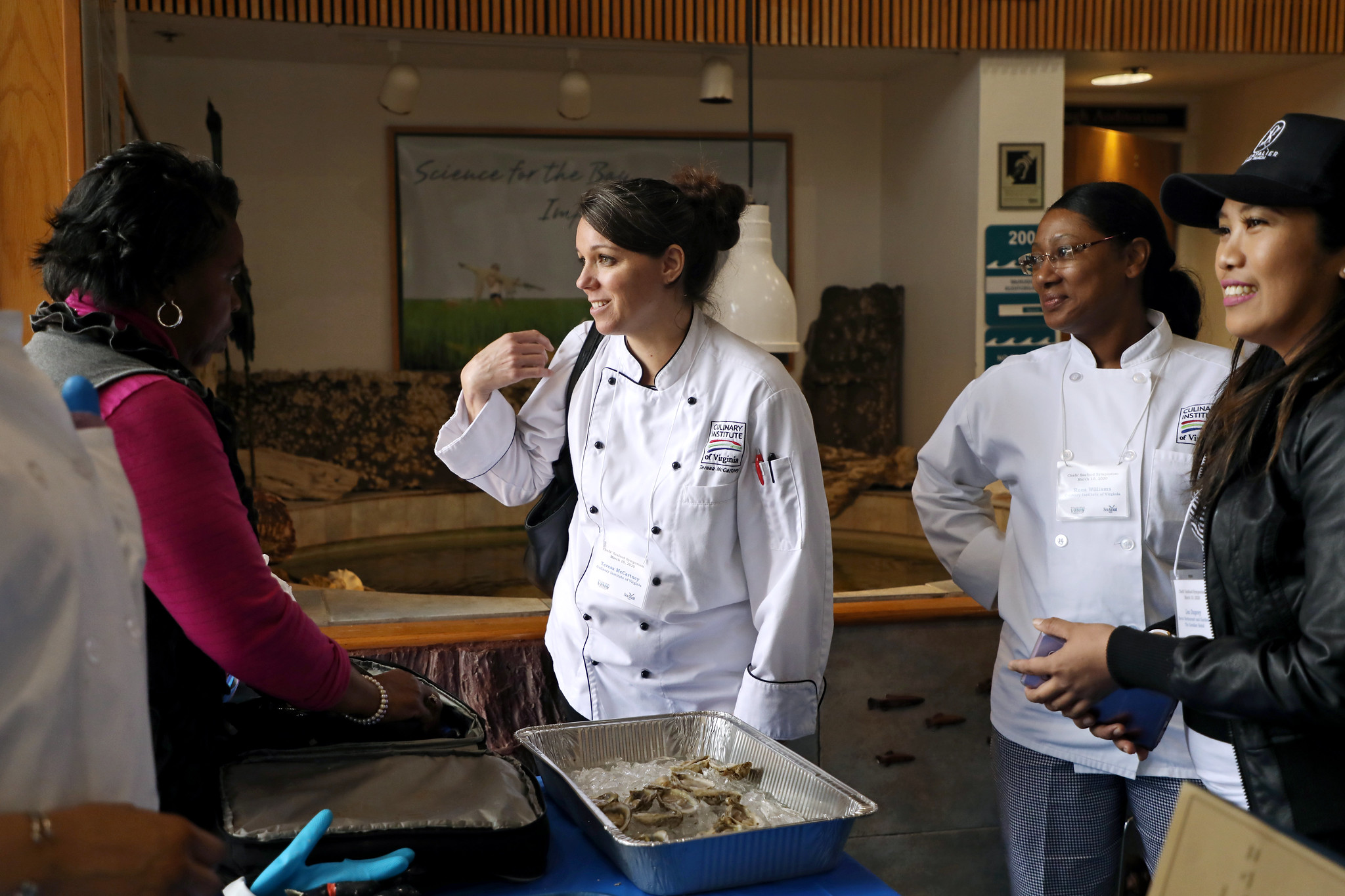 VIMS researchers discussed some of the issues impacting the quantity and quality of seafood available to chefs.