Just like buildings rely on a strong foundation, coastal habitats need a solid base to support marine life. In Virginia’s seaside bays teeming with marine critters on the Eastern Shore, that foundation is oyster reefs. At high tide, the submerged oysters filter water and offer an array of hiding places for small fish and crabs. As the tide rolls out, the oysters peeking out of the water serve as foraging grounds for birds, and serve as a breakwater for the marshes and nearby shorelines.

A number of reefs border the barrier islands, while others are tucked away along meandering tidal creeks. Some reefs are relatively thin, with a single layer of oysters, while others have generations of oysters stacked on top of one another. While these reefs come in many shapes and sizes, they all have one common feature: they can be found within the same two-foot range of water depth.

But within that range, some reefs survive and grow much faster than others. What makes for a successful oyster reef? That’s the question Kinsey Tedford, a Ph.D. Candidate at the University of Virginia, is investigating as part of her Virginia Sea Grant Graduate Research Fellowship. Tedford is monitoring 18 oyster reefs that span more than 65,000 acres on the Virginia Coast Reserve, to see what conditions are most important to optimize reef survival and growth.

Tedford recorded over 150 elevation measurements across each reef, measuring down to a centimeter of accuracy to get a detailed idea of the different reef shapes, heights, and elevations. She used elevations and tidal records to determine what water depths the oysters live in. She also measured how large the oysters were, how many were alive or dead, and how much algae covered the oysters at low tide.

“We collect information about the reefs and their environment all across the Virginia Coast Reserve to gain a better understanding of why some oysters survive and grow really well in one area, but not another,” Tedford said.

Taken together, this information will show which oyster reefs are flourishing — and help reveal what’s most important for their success in the seaside bays, according to Max Castorani, an assistant professor in UVA’s Department of Environmental Sciences and Tedford’s Ph.D. advisor.

“Many factors are important for successful oyster restoration, but it is clear that elevation plays an important role, and one that is likely to change as sea levels rise,” Castorani said. “Kinsey’s research is helping to unravel the complexity that we see in oyster success to make restoration less unpredictable.”

In addition to the oysters already attached to the reef, future growth depends on new oyster larvae settling onto the reef each summer. To measure how many baby oysters attached each year — and whether they settled along the edge of the reef, or the top or bottom — Tedford placed ceramic tiles that mimic the hard, reef-like surface along each of the reefs in the late spring. In the fall, after the oyster spawning season concluded, Tedford counted how many new oysters had attached to each of the tiles.

“Kinsey’s research is helping to unravel the complexity that we see in oyster success to make restoration less unpredictable,” Castorani said.

So far, this restoration work has created about 60 new acres of oyster reef in the Virginia Coast Reserve.

After some initial success, the restoration program expanded beyond restoring existing reefs by creating new, artificial structures where oysters can attach and grow new reefs. So far, this restoration work has created about 60 new acres of oyster reef in the Virginia Coast Reserve.

“When we started, we largely just built new reefs where and when the opportunity presented itself,” Lusk said. “We’ve since been successful, but we haven’t had a good, science-based goal for the total number of acres we want to restore.”

Ultimately, the information from Tedford’s research will help TNC hone in on which areas in the seaside bays are mostly likely to support a successful oyster reef. During the restoration process, TNC must transport tons of shell to dump onto intertidal mud flats, or lug heavy, cement-like blocks to start a new reef. In addition to the work-intensive process, there’s a limited amount of oyster shell available for restoration. Selecting the areas most likely to succeed will help make the most of TNC resources. 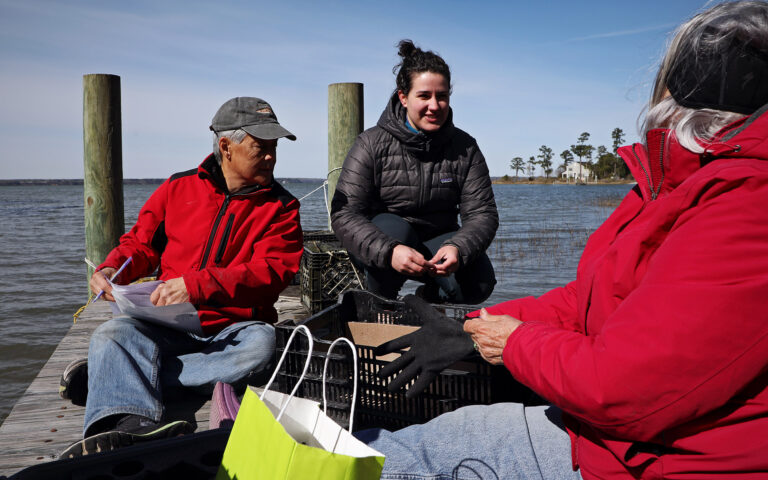