Once, Newton Creek was just that—a tidal creek in the City of Norfolk. Around the 1920s, the creek was filled in to make room for more development, and later, the three public housing projects that stand there today. The only thing left of the “creek” is a reference to it in the name of the Newton Creek Watershed.

Within the watershed lies the St. Paul redevelopment area.  Portions of the St. Paul area are designated by Norfolk as “neighborhoods of the future,” since their naturally high elevation puts them at less of a risk for coastal flooding. To reinvigorate this swath of land, the city is introducing housing that accommodates current and future residents—while also accounting for ecological conditions like the filled-in creek bed.

Concurrently, a group of students are using the area as a case study for their own analysis to provide holistic options for the redevelopment of the Newton Creek Watershed.

Humans and nature in harmony

While working on the St. Paul redevelopment area, the Coastal Community Design Collaborative—a transdisciplinary group of architects, engineering, marketing, and marine science students from Hampton University and Old Dominion University—had specific goals. The group wanted to “re-knit” the area back into East and West Norfolk by creating a pedestrian-friendly atmosphere. They proposed breaking down the “super blocks” of public housing into smaller, more neighborhood-friendly blocks that would allow culture and community to develop.

The group also made sure their plans contained enough housing to accommodate the current residents of the public housing units. The group surveyed some of Norfolk’s more historic developed blocks. Looking at the layout of these city blocks helped them understand the maximum number of people a block could house without detracting from the neighborhood’s sense of community and walkability.

The team ultimately decided that a healthy mix of housing units would help accomplish the goal of accommodating the vast majority of current residents and welcoming new residents too. Their plans mimicked the blocks from other portions of Norfolk that hold higher densities of people.

“A lot of what we’re trying to do is bring back those streets of commerce that were once there,” said Ashley Montgomery, a Virginia Sea Grant future resilience leader and recent graduate of Hampton University’s architecture program.

Montgomery said the group wanted to bring back the historic Black and Jewish neighborhoods that once thrived in this area before the public housing was developed. To do so, their designs brought back the major streets like Church Street and Chapel Street that once provided businesses like corner drug stores and grocery stories for the community.

Before redevelopment could begin, the CCDC needed an out-of-the-box water management plan for the Newton Creek Watershed. Even though St. Paul is designated as high ground, it still experiences flooding from heavy rainstorms. This gave the group an opportunity to plan a stormwater management strategy to redirect flooding and keep the neighborhood functional.

“It’s difficult because it’s on an existing creek bed, and that creek bed has a tendency to flood,” Montgomery said.

As the students studied flooding patterns in the area, they noticed the former creek bed’s flooding was often due to poor drainage from the creek bed’s soil. This gave them an idea: Would digging out and restoring the creek help reduce flooding?

Montgomery and the team wanted to create designs that would take advantage of features that are already present in the neighborhood’s landscape. To do this, the students needed more information about the soil conditions that would impact their designs. 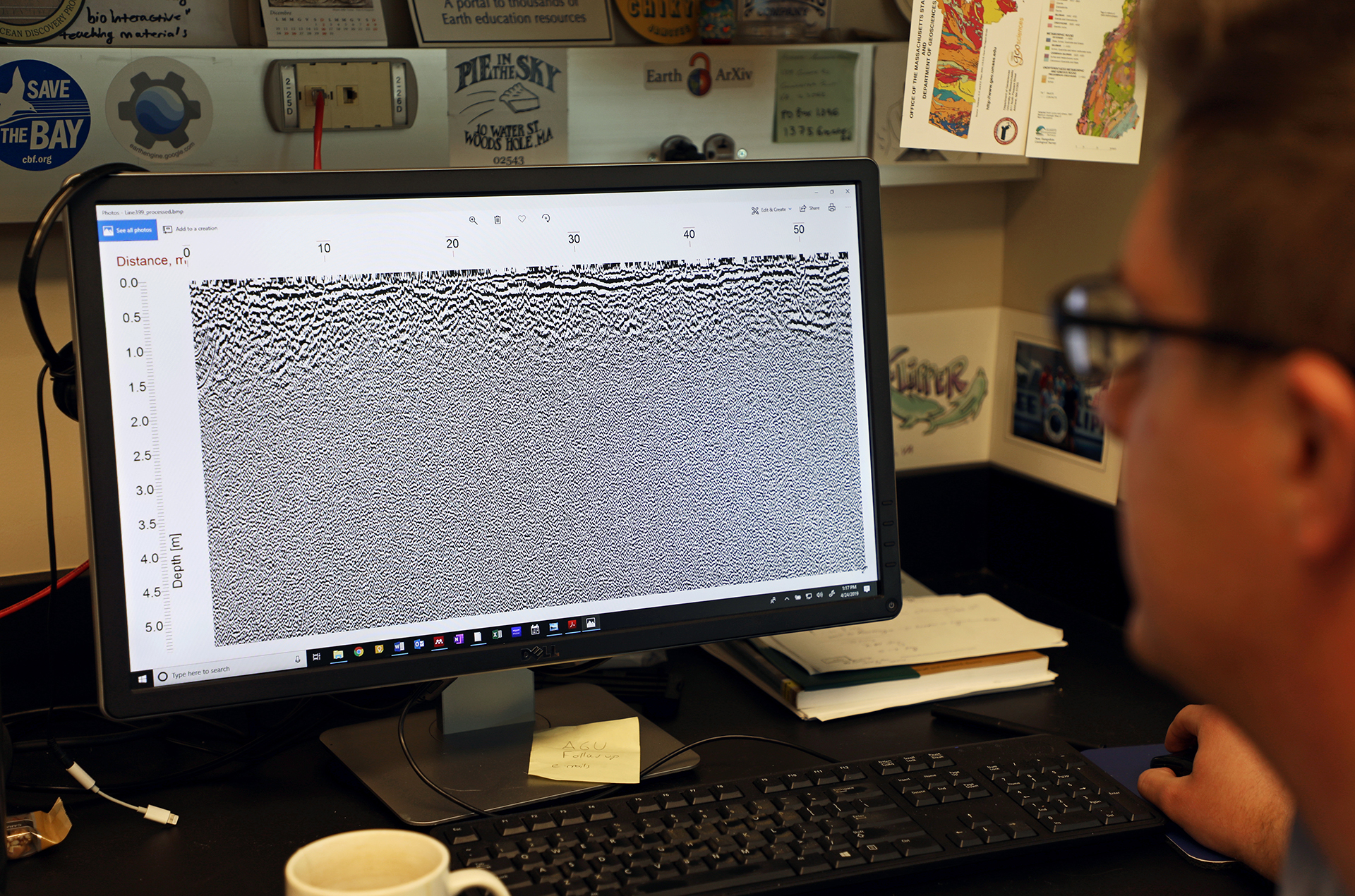 Portions of the St. Paul area are designated by Norfolk as “neighborhoods of the future,” since their naturally high elevation puts them at less of a risk for coastal flooding.

Digging deeper for answers, without digging

If the creek’s drainage was still influenced by the tide, only certain types of building foundations could be used for redevelopment. Students had determined the creek’s historic boundaries by comparing old maps of the area, but they still didn’t know what materials were used to fill in the creek. Before they could bring the creek back, the students needed more information about the sediment and groundwater of the filled-in creek.

“Part of that was understanding what they filled it in with. Dirty diapers, bricks, who knows?” Montgomery said.

Historic records alone couldn’t answer the question of how the creek bed affected the modern system, so Montgomery called on the expertise of Justin Shawler, a student at the Virginia Institute of Marine Science (VIMS) and Virginia Sea Grant graduate research fellow, after the two discussed the project over dinner during a VASG workshop.

“It sends a radar signal into the earth, and the different density properties of the soil, sand, clays, whatever's down there,” Shawler said. “Basically, those have different reflection properties, so the signal is reflected differently.”

The radar reflection changes in response to the soil’s electrical properties, including soil density or water content. A lost radar signal can indicate saline groundwater or mud.

On a computer screen, the GPR’s layers of black-and-white blips resemble a QR code. A trained eye can use the GPR patterns to distinguish layers of coarse sand from dense, mineral-rich clay—especially if they pair the GPR data with sediment cores taken from the area.

The group also installed groundwater monitoring wells to confirm the presence of mud—and possibly, saltwater. But groundwater wells and sediment samples can change based on the weather, tide, and season. The GPR gave the students an overall picture of the creek system before they even dug into the ground. Ultimately, the students found that the groundwater was too high to dig out the creek, so they instead proposed to build what Montgomery calls a “catcher’s mitt” along one of the banks of the creek, creating dirt boundary to help contain water.

“The creek can be used as a flood-able park, so when it rains, it'll flood, and it's depressed just enough to where it'll catch that water,” Montgomery said.

Even though the team determined that they couldn’t resurrect the original creek bed, the GPR and other technical information about the soil still informed the students’ designs. For Shawler, the collaboration allowed him to apply his research tools for a different type of project.

“It was neat to work with that different timescale and realize the implications of the geology,” Shawler said. “Some system that naturally evolved over thousands of years in a short time—hundreds of years—was altered significantly by humans.” 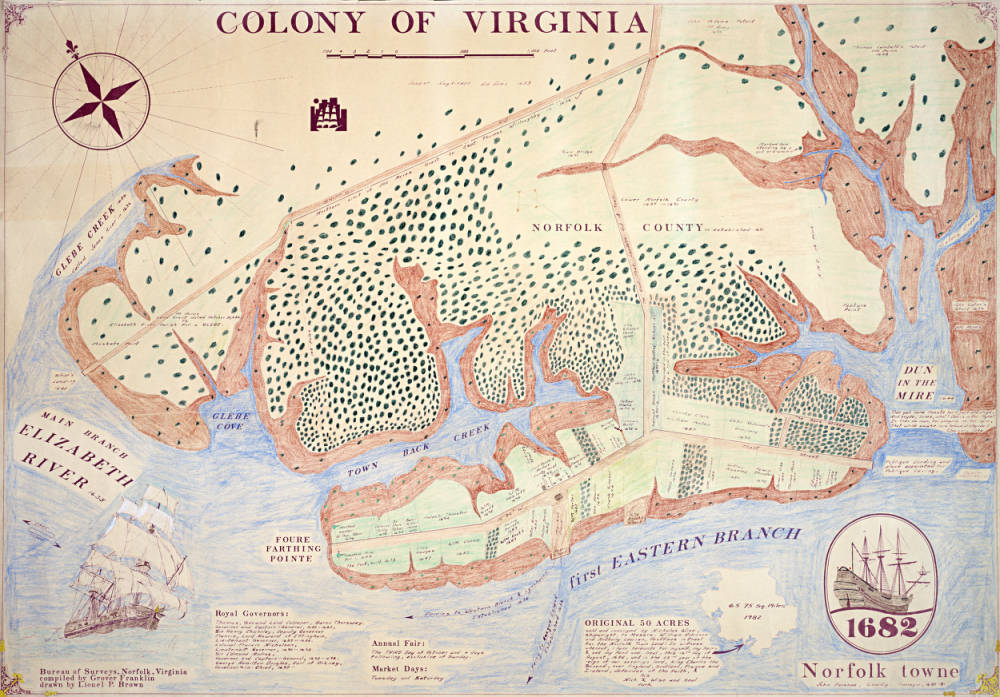 “A lot of what we're trying to do is bring back those streets of commerce that were once there,” said Ashley Montgomery, a Virginia Sea Grant future resilience leader and recent graduate of Hampton University’s architecture program.