The following blog post is by Amanda Laverty, a 2017 Sea Grant Knauss Marine Policy Fellow hosted by the NOAA Marine Debris Program. Laverty was sponsored through Virginia Sea Grant after graduating from Old Dominion University with an M.S. from the Department of Ocean, Earth and Atmospheric Sciences.

After an exceptionally inspirational plenary at the 2017 Blue Vision Summit in downtown Washington, D.C., I excused myself from a group of colleagues and briskly headed down the steps of George Washington University’s Marvin Center so I could catch my hero before she made her exit.

“Hi!” I exclaimed, “I’m Amanda Laverty. I’m a Sea Grant Knauss Fellow working with the NOAA Marine Debris Program. I admire you so much for everything you’ve contributed to science and to the world. Thank you for all that you do.” 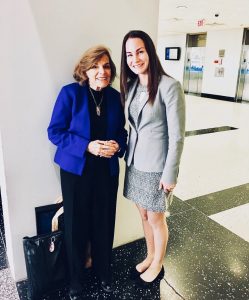 She smiled at me kindly and thanked me for introducing myself. We talked for a short while about her work, and then about mine, before she subtly reached into her suit pants pocket and pulled out a small blue marble. She placed it in my hand and thanked me for my work in science and with NOAA. I remember looking down at that little blue marble so intently. I couldn’t believe what was happening—Dr. Sylvia Earle, the first female chief scientist at NOAA and a legendary oceanographer, was thanking me for taking care of our planet. Albeit a bit stunned, I was on cloud nine.

The Blue Marble is the first image of the whole round Earth and is one of the most reproduced photographs of all time. In 1972 aboard the Apollo 17 spacecraft on its way to the moon, astronauts pointed their 70-millimeter Hasselblad camera back at our illuminated planet. In that moment, they likened the appearance of the slightly gibbous Earth to a glass blue marble, which coined the name.

Three decades after this pivotal moment in history, marine biologist Dr. Wallace J. Nichols started the Blue Marbles Project. To date, the project has initiated the sharing of blue marbles with millions of people around the world to serve as a simple message of gratitude to those tending to our beautiful, fragile, little blue planet. Holding these blue marbles up at arm’s length, we can imagine how we look from thousands of miles away. We are a planet made mostly of water, and as Sylvia Earle would say, “No water, no life. No blue, no green.” Fundamental to life on Earth, it is critical that we understand that while we live on a little blue marble relative to the rest of the Universe, what we do matters, and it matters a lot.

At current, our ocean planet is suffering for many reasons, but one very large and tangible issue is plastic pollution, which is what brought me to the NOAA Marine Debris Program for my Knauss Fellowship in 2017. Working with the program, I had the unique opportunity to be engaged in various projects ranging from communications and research to policy and waste management.

One of my favorite projects was leading the zero-waste initiative for the Sixth International Marine Debris Conference (6IMDC), held in San Diego in March of 2018. The event served over 750 attendees and resulted in the avoidance of 76,300 single-use items, a 50 percent reduction in the venue’s typical weekly landfill waste, the composting of approximately 7,300 lbs of food scraps, and the donation of 300 meals to Chefs to End Hunger. Based on attendee feedback, the zero-waste initiative was one of the most valued aspects of 6IMDC, and following the conference many attendees reached out for help in regard to their own event planning. It was incredibly encouraging to see that our efforts to reduce plastic consumption at this international conference created a ripple effect through our attendees and speakers.

As advocates for Earth and its inhabitants, we can share our passions, dedication, and knowledge to help inspire others to stand up for our planet. In this way, I see Sea Grant Knauss Fellows themselves as little blue marbles scattered throughout Washington, D.C. (and elsewhere). We represent the next generation of ocean advocates and policy makers, and I’m confident that our collective actions and appreciation for the planet will continue to flow through science and government for decades to come.

I’m looking forward to seeing you out there!