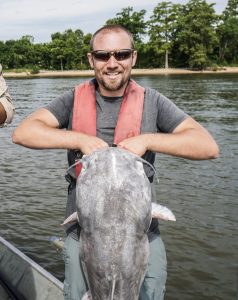 A new study is the first to estimate food consumption rates for blue catfish in four tidal tributaries of the Chesapeake Bay: The James River, the Mattaponi River, the Pamunkey River, and the Rappahannock River. On average, a blue catfish eats roughly 2-5 percent of its body weight in food in a day during peak feeding season, according to the research published in Transactions of the American Fisheries Society.

“This is the first time we’ve looked at how much blue catfish are eating both in the field and the lab using natural food sources, and for larger fish,” said Joe Schmitt, who led the study of more than 1,200 catfish as part of his Virginia Tech Ph.D. research and Virginia Sea Grant graduate research fellowship.

The researchers also measured how much a blue catfish would eat if they had unlimited food available to them — in this case, blue crab or gizzard shad — and found that the catfish could eat anywhere from 8-9 percent of their body weight in a day. Medium-sized blue catfish consumed more food than the largest blue catfish in the laboratory tanks, although it was unclear whether this eating pattern also holds true out in Virginia’s tidal rivers.

“I think that’s still an open question,” said Donald Orth, a professor in the Virginia Tech Department of Fish and Wildlife Conservation. “Do the fish become more sluggish and feed less when they are adults than they do as smaller fish? We like to think, ‘They’re younger, and they’re just going to be hungrier like a teenager,’ but that’s still hard to demonstrate with the sample size we had.”

“We knew anecdotally that blue catfish eat a lot,” Morgeson, a regional fisheries manager for the Virginia Department of Wildlife Resources said. “You can look at a big one, see its large stomach, and see that this one has hit the buffet line. But this paper has allowed us to put a number on that, and that allows us to draw a line between that number and the impacts that these fish can have on our native species.” 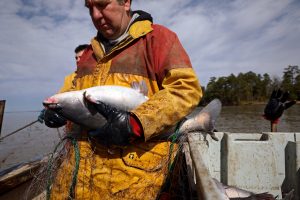 Waterman George Trice works to untangle a blue catfish from his gill net in Williamsburg, Va.

Blue catfish compete with native fish for the food sources available in the river. They eat commercially important species like blue crabs, and also eat native species of concern like American Shad, alewife, and blueback herring.

“When you start putting all these pieces together, you get a more holistic picture of the impact of blue catfish on our native species,” Whitmore said. “Consumption rate is a really important step in that process. It really is a gateway to answering a lot of questions down the line.”

While blue catfish aren’t anomalous in how much food they ate, their abundance in Virginia’s rivers means there are more stomachs to fill.

“We knew anecdotally that blue catfish eat a lot. You can look at a big one, see its large stomach, and see that this one has hit the buffet line. But this paper has allowed us to put a number on that," Morgeson said.