Sixteen projects were selected for the Sea Grant 2019 National Aquaculture Initiative opportunity in exploring new aquaculture opportunities. These projects will focus on the development of new, and at times higher-risk, topics for which minimal foundation currently exists to inform and focus potential future investments. Read more about Virginia Sea Grant’s funded projects below.

Butler has identified more than 150 naturally occurring quarries as possible sites for king crab mariculture. Butler will investigate whether these abandoned quarries could serve as habitat for king crab where they would be shielded from predators. The researchers will also look for genetic traits associated with health and growth in order to enhance any mariculture efforts.

The current demand for crabmeat in the United States has resulted in imported crab meat. King crab shows promise as a local seafood commodity for Florida due to its similarity to the Alaskan King Crab in flavor and consistency. King crab growth rates are comparable to other species of crabs that support profitable fisheries, according to previous research. Research has also indicated king crab in Florida could support a niche soft-shell market similar to that of the soft-shell blue crab market in the mid-Atlantic. 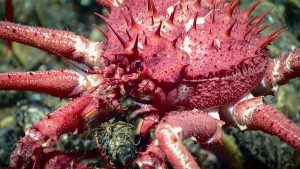 Virginia’s shellfish aquaculture industry, consisting of hard clams and oysters, is currently valued at more than $53 million in annual farm gate value, and the oyster industry continues to expand. One constraint to aquaculture, fouling organisms, are pests that reduce profitability due to the labor costs to remove them or the damage they cause for the shellfish.

In Virginia, two main fouling organisms for oyster aquaculture are the boring sponge (Cliona spp.) and the mud blister worm (Polydora websteri). These two organisms bore into oyster shells and weaken them, causing the oysters to crumble and break when shucked.

Karen Hudson, a shellfish aquaculture specialist with the Marine Advisory Program of the Virginia Institute of Marine Science (VIMS), will test a rapid-detection method for these organisms in collaboration with the Virginia Sea Grant Marine Extension Program, VIMS Fisheries Science, and Bay Oyster Company.

This project will investigate the possibility of a species-specific assays for boring sponge and mud blister worm. This detection tool would use the traces of their DNA in the environment, known as eDNA, to test for the presence of these fouling organisms.

Neither the mud blister worm or boring sponge are new to Virginia’s aquaculture farms, although farmers have reported that the boring sponge has become a more widespread problem in recent. A rapid-detection method for these pests would give aquaculture farmers an early warning about their presence on oyster leases, and a chance to begin mitigation strategies.

Hudson and her collaborators will investigate this proof-of-concept eDNA method for spotting boring sponge and mud blister worm, which could be further developed if successful. Advance warning would allow aquaculture farmers to begin early treatments for the pests, resulting in more “shuckable,” aesthetically pleasing—and valuable—oysters.