Too much of a good thing can be bad for ecosystems. The same fowl manure that makes your tomatoes grow so well can cause dead zones in the Chesapeake Bay. The nutrients in the manure—known as nitrates by scientists—access the Bay via tidal creeks and can be fueled in large part by wastewater from poultry processing plants, and chicken poop from large farming operations.

Miguel Semedo, a Virginia Sea Grant Graduate Research Fellow and Ph.D. candidate at the Virginia Institute of Marine Science (VIMS) is researching tidal creeks as a window into the world of human impact on local ecosystems.

Tidal creeks are home to a diverse range of birds, fish, and plants. Although these creeks are shallow and can be as short as two miles in length, they have a large footprint and are prone to heavy impact from human activity. They connect estuaries to inland areas, and nearby communities directly affect the streams.

One such human impact is the poultry industry. Virginia was ranked 10th in the nation for production of broiler chickens in 2017 and is home to multiple major poultry plants. While wastewater from these plants is treated, nitrates and contaminants from some do reach the water in nearby tidal creeks. The nitrates can trigger a chemical process called eutrophication—when excess nutrients in the water stimulate harmful algal blooms. This process and its consequences may result in oxygen depletion in the water body that suffocates the fish and other organisms in the creek.

“Eutrophication is kind of a symptom of an ecosystem disease. What is causing the disease is the excess nutrient,” says Bongkeun Song, an associate professor in the Department of Biological Sciences at VIMS and Semedo’s research adviser. “You have a system getting too much nutrient, and the system cannot tolerate how much is coming in, just like too much food and less exercise can lead to obesity. As you’re adding excess amounts of nutrients, the phytoplankton start to grow like crazy and bloom.”

These blooms create huge amounts of organic carbon and sugars. In a system with too much sugar, the bacteria expand their sugar-related activities and consequently use up all the oxygen in the water. As a result, finfish and shellfish lack the oxygen they need to survive.

However, communities of microbes known as denitrifiers help offset these increases in nitrate levels. The denitrifying bacteria living in tidal creeks take nitrate from the water and convert it into atmospheric nitrogen—thereby preventing harmful algal blooms and the resulting dead zones and fish kills.

Other contaminants such as metals, chlorine, or antibiotics from the poultry processing plants can impact the denitrifying bacteria, preventing them from filtering out the nitrate from the creek’s water. Without the activity of the denitrifying bacteria, the high levels of nitrate remain in the creek, which Semedo said can be anywhere from 10 to 50 times greater than natural levels.

“It’s like a two-fold effect: Besides releasing higher amounts of nitrate, the poultry processing plants may also be impacting the capacity of the tidal creeks to remove the nitrogen,” notes Semedo. “We have been seeing that the sites that are closest to the processing plant have a lower denitrification rate than sites farther away from the plant.”

To study whether contaminants in the water impede the denitrifying bacteria, Semedo focused on two tidal creeks on the Eastern Shore of Virginia: one that receives treated wastewater from a processing plant and one that doesn’t receive wastewater discharge. He collected sediment samples from different sections of both creeks and compared them according to their distance from the processing plant. 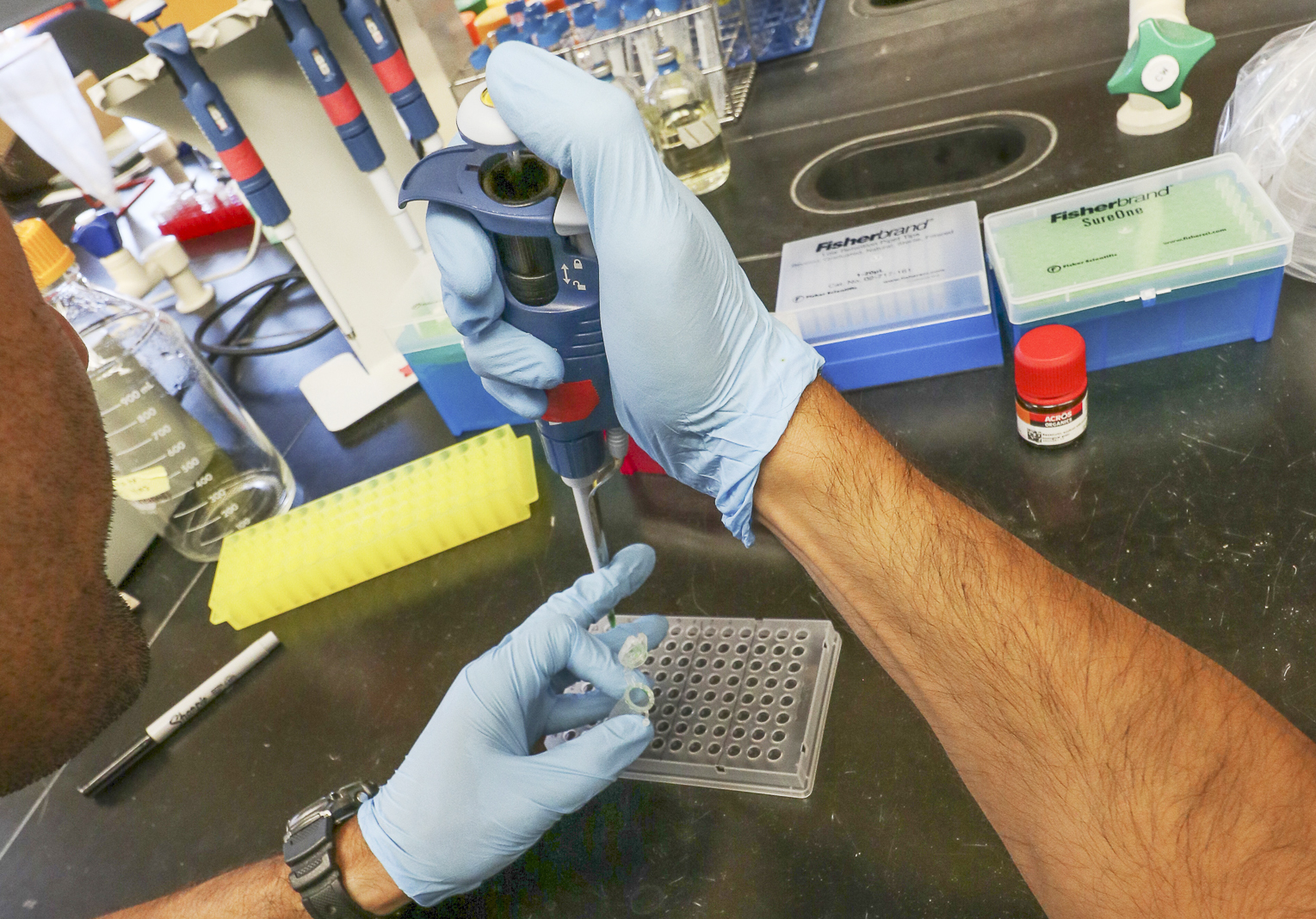 “Microbes are capable of almost anything metabolically and the way they shape the environment is so powerful. They are so essential to everything,” says Semedo.

Back in the lab amid glassware, pipettes, and the quiet whirring of instruments, Semedo studied the denitrifying bacteria that live in the sediment. He measured how many denitrifiers were present in deposits from different parts of the creek, and used labeled nitrogen to measure how much nitrate the bacteria were able to process.

Since the denitrifiers of the tidal creeks include a variety of different bacteria, Semedo also worked to identify which bacteria were most susceptible to the contaminants and which types of bacteria may be more resistant. Using a process called next-generation sequencing, he has already identified one class of denitrifying bacteria that is less abundant nearer to the processing plants.

“Not every lab does this, but I think it’s really useful because then we can understand why changes are occurring,” adds Semedo. “Because these activity rates are driven by microbes, we need to see how the microbial communities are responding to the wastewater.”

Although Semedo is still analyzing the data he collected, he has presented some preliminary results to local communities and organizations.

“Talking with local organizations was very meaningful, and realizing the interest of everyone in this research,” Semedo says. “What we are studying and what we are asking may impact their lives and the quality of local waterways that the local communities really value.”

His work toward determining how the poultry processing plants are affecting the tidal creeks and the denitrification process may help guide the policy process. As scientific understanding advances, permits can be updated to make sure they protect local waterways. As the Virginia poultry industry expands, more communities are asking questions about how resources like tidal creeks will be affected.

“We have the potential here to be a national model for how to do things in an environmentally responsible fashion,” says Jay Ford, the Virginia Voices Coordinator with the Chesapeake Bay Foundation. “That means getting the information to have proper oversight and management of these facilities. The Eastern Shore has just been so glad to have Miguel out here doing this important work and filling in these information gaps.”

Talking with local organizations was very meaningful, and realizing the interest of everyone in this research.

"Not every lab does this, but I think it’s really useful because then we can understand why changes are occurring." - Miguel Semedo