Sometimes on late summer nights, the waves glow bright blue along the beaches of the York River. But the algal blooms responsible for this spectacle can also cause trouble for oyster aquaculture.

“Everyone gets excited because the bioluminescence is pretty cool, but they are a harmful species,” said Kim Reece, a professor of aquatic health sciences at the Virginia Institute of Marine Science (VIMS).

By day, this same algal bloom, Alexandrium monilatum, forms swaths of dark red in the water, often following blooms of Margalefidinium polykrikoides. These two blooms are nicknamed “Alex” and “Marge” for easy reference by the researchers that study them, like Reece and her graduate student Clara Robison, a Virginia Sea Grant Graduate Research Fellow.

Adult oysters can sense when these harmful algal blooms (HABs) are in the water, and temporarily stop feeding to avoid taking in toxins. But if the blooms persist for enough time, the oysters may start filtering water again and take up toxic cells. Some oyster growers reported that 60-70 percent of their oysters died in 2015.

“We had one year where I had a lot of die-off from red tide, and so I went to Kim to develop a study for the harmful algal blooms and use this as one of the sites,” local oyster grower Tommy Leggett said. “I just lost a heck of a lot of oysters here.”

For her fellowship research, Robison investigated the direct effects of these two harmful algae species on oyster aquaculture. She worked with her professional mentor, Leggett, to deploy oysters in the York River area. She built her own oyster cages and oyster bags and learned the methods used for aquaculture to make her research as useful as possible for local growers.

Robison did observe a lag in oyster growth about two weeks after Alex blooms occurred in 2017, but the lack of blooms during her second summer of fieldwork left the researchers with some unanswered questions about the effects of severe blooms that need additional years of study.

“When we think about HABs, sometimes they have direct impacts, like exposing organisms to toxins, but there are also many indirect impacts, like lowering the water’s dissolved oxygen, and building up biomass that might clog gills of oysters or fishes,” Robison said. “It’s possible some of those biological impacts may take longer to become visible in the metrics of health we were looking at.”

Back in the lab at VIMS, Robison also determined that Alex toxins can be taken up by oysters and remain in their gut for at least two days after the oysters are exposed to the toxins. She is continuing this investigation as a technician in Reece’s lab to determine how quickly the toxin can accumulate in the oysters, and how long it takes for the oysters to get rid of the built-up toxins.

Robison and Reece are continuing to collaborate with Leggett and other growers to monitor harmful algal blooms. For some projects, they regularly collect water samples and monitor oysters on a schedule. But some collaborations are spontaneous, where they might have a concerned grower contact them after a bloom with a sample in an empty soda bottle. 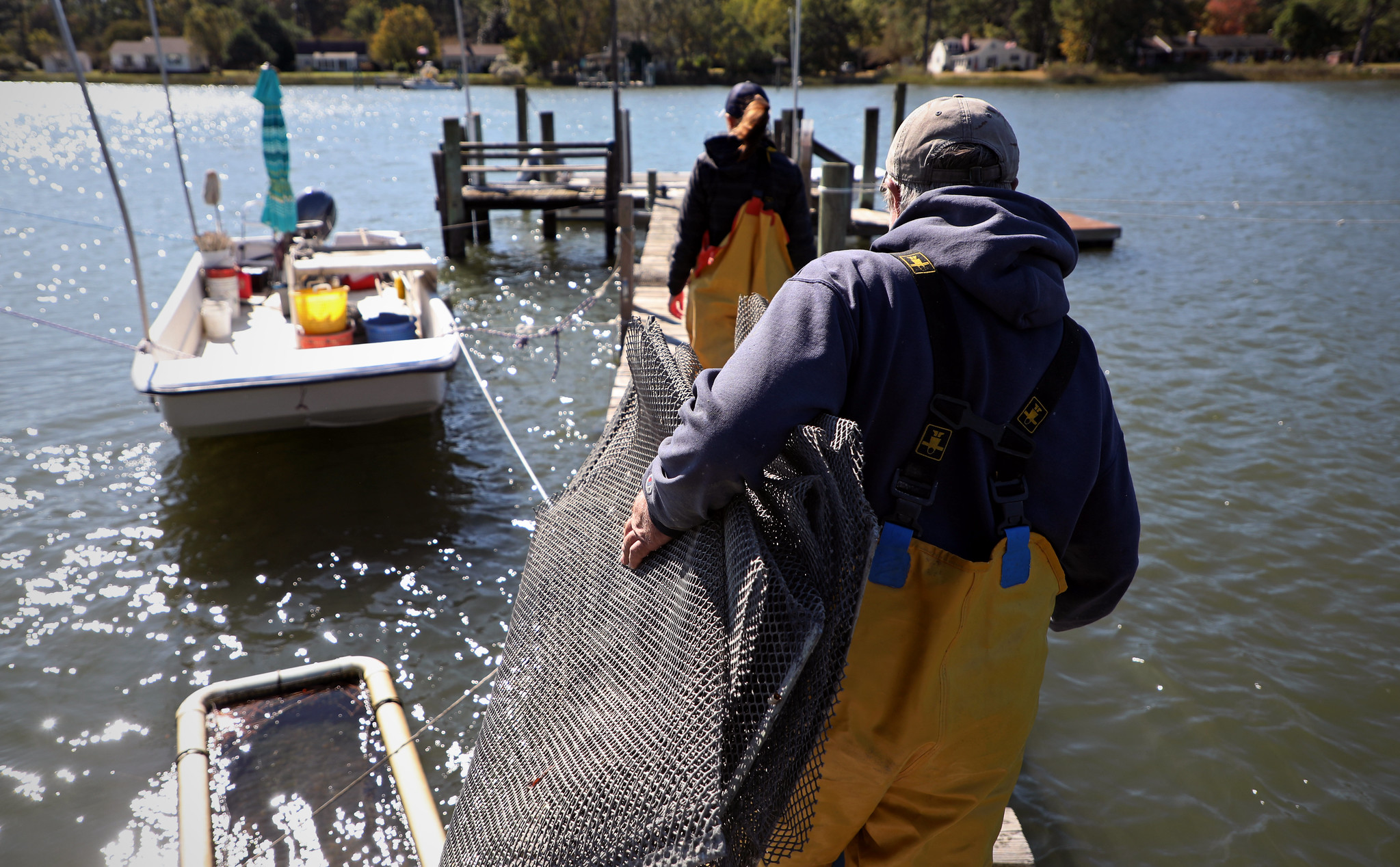 “The growers aren’t necessarily checking their oysters every single day,” Reece said. “They might go out a week after a bloom and find out their oysters have died.”

Now, Robison conducts most of her research in the lab, but said her collaboration with Leggett gave her an appreciation for the importance of oysters—both for local businesses and the Bay. Robison also learned the intensive process of growing an oyster the size of a grain of sand all the way to market size while working alongside Leggett.

“Because he’s a grower and a business owner, I even got to drop off the oysters at local restaurants,” Robison said. “It was really a complete picture of oyster aquaculture.”

"I even got to drop off the oysters at local restaurants,” Robison said. “It was really a complete picture of oyster aquaculture.”