For anglers, all it takes is a pair of polarized sunglasses to see into the water — and spot cobia from their boat tower. For Virginia’s many cobia enthusiasts, this vantage point gives them a chance to sight-cast for a popular fish that fights hard and offers a tasty fillet.

In the last decade, recreational anglers have caught an average of 1.9 million pounds of cobia each year. Roughly three-quarters of these cobia are caught in Virginia and North Carolina. During the summer, cobia migrate to the Chesapeake Bay to spawn, and are a popular fish to catch for recreational fishers. These fish fight hard — a fight that takes lots of energy. With the added stress from warming water temperatures, how will cobia fare in a changing climate?

Graduate Research Fellow Dan Crear studied how warmer, low-oxygen water conditions might affect cobia migration patterns and metabolism during his Ph.D. research at the Virginia Institute of Marine Science. He also studied how cobia respond to their environment in present-day conditions.

“I think it’s important to take a step back and also think of today. What are they doing now, where are they now? Then I can ask the question of how climate change is impacting cobia,” Crear said.

Will climate change take the fight out of the fish?

Like most fish, cobia choose where to live based on a variety of factors, like where they can find food and shelter. Cobia are hardy fish that can handle the summer temperature fluxes in the Chesapeake Bay. As these extremes are heightened by climate change, cobia in the Bay will face even higher water temperatures, and larger dead zones with low oxygen in the future.

“Cobia can withstand really warm temperatures and really low oxygen levels,” Crear said. “However, when they’re exercised really heavily, their ability to handle those stressors goes down a lot.”

In addition to water conditions, another source of stress is on the rise. Recreational cobia fishing has hit all-time highs in recent years, and cobia in the Chesapeake Bay may experience stress from being caught and released.

As part of his research, Crear determined cobia’s tolerance for high temperatures and low oxygen. He also tested how fast they recovered after intense exercise similar to what cobia experience if they’re caught and released by anglers.

In his experiment, the cobia swam hard around a lab tank for six minutes and were exposed to air for a minute. Then, Crear put them in a smaller chamber where he measured how much oxygen the fish were using — a measure of the energy they’re using. He tracked how long it would take the fish to return to normal breathing and how much oxygen they needed to recover after extreme exertion.

The cobia were able to recover from the exercise up until the most extreme temperatures at 90 degrees, at which point some cobia died from the combined stress of warmer water and exercise.

Crear also measured cobia’s tolerance for low oxygen levels, similar to what they might experience in dead zones in the Bay.

“Based on my work, they’re going to be just fine with climate change for at least the next 30 years,” Crear said. “By 2100, they may be more negatively impacted, but I think cobia are going to be in a much better position than many other species because they’re so hardy.”

As temperatures rise, cobia may start to change their travel patterns to stay in fairer waters.

“Cobia are already tolerant of more extreme conditions because they use coastal habitats,” Crear said. “Because they are able to handle a wide range of environmental conditions, they will likely just move to areas that are a little bit better.”

Cobia travel to the Chesapeake Bay and other estuaries in North and South Carolina to spawn in the summer. In the winter, they travel offshore to deeper waters where the temperature is more stable. The seasonal shift in water temperatures cues the cobia to travel into the bay and spawn — and back out again in the winter.

To understand when and where cobia migrate throughout the year, Crear caught, tagged, and released more than 50 cobia with the help of cobia anglers. Using the information he gained from the tags, Crear tracked when and where these cobia migrated — and the water temperatures they swam in.

Then, he studied temperature trends in the Chesapeake Bay and the Atlantic Coast to model how much habitat was available for cobia each month of the year from 1994-2018. He also looked at projected water temperatures for the next 80 years to predict how cobia habitat may shift in the future.

With warmer water temperatures, cobia are likely to migrate inshore earlier — as much as 9 days earlier for every 1.8 degree Fahrenheit increase in water temperatures. By mid-century, cobia may spend as much as 30 days longer in the Chesapeake Bay, and that could increase to 65 more days by the end of the century.

Although cobia may visit Virginia waters for longer, Crear’s habitat modeling also showed that the overall habitat area within the Chesapeake Bay where cobia can survive will likely shrink due to the extreme warm temperatures in the middle of the summer.

“Although cobia may migrate inshore earlier and stay in the Chesapeake Bay longer, the actual habitat available to them may be smaller,” Crear said.

Currently, the vast majority of cobia are caught in southern waters, and Virginia is the farthest north they travel. But as water temperatures continue to warm throughout coastal waters, more habitat was available to cobia in states north of Virginia. In Crear’s habitat modeling projections for 40-80 years into the future, New Jersey saw the highest percent increase in suitable cobia habitat, followed by New York and Connecticut.

As cobia shift, management has, too

Up until three years ago, Atlantic cobia north of Florida were managed by both the South Atlantic Fishery Management Council, which focuses on fish caught in federal waters, and by the Atlantic States Marine Fisheries Commission. As more cobia were caught nearshore in state waters — and their range began to expand farther north, Atlantic cobia management was shifted entirely to the Atlantic States Marine Fisheries Commission (ASMFC), said Pat Campfield, director of the ASMFC Fisheries Science Program.

“They’re seeing cobia catches as far north as Rhode Island now — not necessarily as common or frequent as catches down here in the Mid-Atlantic or South Atlantic — but there does seem to be an apparent shift in cobia distribution to the north,” said Campfield, who served as Crear’s professional mentor.

The Atlantic States Marine Fisheries Commission sets an overall harvest quota based on a scientific stock assessment, which combines commercial and recreational catch data, cobia monitoring surveys, and research to determine whether Atlantic cobia are overfished or experiencing overfishing. During the 2018 stock assessment, Crear participated in the data workshop, learned about the assessment process, and shared information about how climate change could impact cobia habitat.

“The stock assessment is really important to inform what that total harvest quota should be,” said Emilie Franke, the Cobia Fishery Management Plan Coordinator at ASMFC. “The fishery management plan specifies certain size limits and vessel limits for the recreational and commercial cobia fisheries. All states have to abide by that fishery management plan.”

Then, ASMFC gives each state a portion of the total recreational quota based on historical landings in the state. Each state monitors cobia landings each year, and adjusts state regulations in order to stay on track with the harvest targets from the ASMFC.

Although the ASMFC doesn’t directly consider climate change when setting overall harvest limits for cobia, Franke said individual states could use Crear’s research to understand when cobia may migrate to different areas depending on temperature, which may result in cobia being more or less available in their state waters. The ASMFC has included Crear’s research in several newsletters, and helped him develop a StoryMap about his project.

“Dan and [his advisor] Kevin’s research at VIMS is very cutting-edge,” Campfield said. “There are few fish stocks where we have been able to predict future distributions in the context of changing temperatures.” 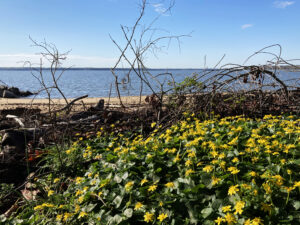