The workshops’ purpose was to listen to the communities living with flooding.

We want to make sure we’re not just assuming what communities desire, but that we’re actually understanding and solving peoples’ problems,” said Ben Nettleton, a Virginia Sea Grant fellow.

To hear from communities firsthand, Ben Nettleton, a Commonwealth Fellow hosted by The Nature Conservancy (TNC), helped organize two workshops to better connect TNC with local residents on Virginia’s Eastern Shore. Nettleton organized workshops on the seaside in Wachapreague and on the bayside in Craddockville.

The oceanside of the Eastern Shore faces the harshest effects of storm surge from nor’easters and wave action, but also benefits from the protection of the barrier islands. The bayside is shielded from the full force of many storms, but also has a network of low-lying roads and homes exposed to smaller, more persistent flooding events from tidal creeks.

“Everyone there is being impacted, from the watermen to the second homeowners to the schoolteachers,” Nettleton said. “It’s all impacting people—it’s just in different ways.”

Pastor Rob Kelley of Craddockville United Methodist Church said his parishioners sometimes have trouble getting to church services or places like the supermarket due to flooded roads. Kelley, who grew up near Craddockville and lives there now, recalls that there wasn’t always this much flooding.

“It used to be the record-setting high tides were because of a big storm, but now you’ll start to see them just because it’s a full moon,” Kelley said.

Tides aren’t the only thing changing—there is also more rainwater collecting in standing puddles after storms.

At the workshops, Curt Smith, director of planning for the Accomack-Northampton Planning District Commission, discussed the vulnerability of roads and infrastructure along the Eastern Shore. A 2015 transportation study indicated that nearly a quarter of all roads on the Eastern Shore could experience saltwater inundation toward the end of the century.

“Whenever the tide comes up, the water is just slowly coming up into the yard, and you wonder how far it’s going to get…and it is getting worse,” said Susan Vreeland, whose backyard borders Craddock Creek. “We’ve talked to some people, but it’s hard figuring out what to do.”

Vreeland has attended resilience-themed workshops before, she said, but hearing how local leaders are planning for the future and responding to flooding was informative—and even reassuring.

Workshop participants also had a chance to use TNC’s Coastal Resilience Tool to model future flooding or shoreline change at a local level. They can look up their property and see how much water they can expect from a certain hurricane intensity or from different projections for sea level rise to identify how vulnerable they might be. The tool is frequently updated with new features, like a shoreline habitat app to show how marsh systems might migrate. Nettleton said that citizen feedback from workshops like these helps TNC make the tool more useful.

“Everyone there is being impacted, from the watermen to the second homeowners to the schoolteachers,” Nettleton said. “It’s all impacting people—it’s just in different ways.”

Local knowledge of erosion and shoreline changes is also helpful to researchers. At the workshops, attendees had a chance to record the changes they’ve seen on sticky notes and pin them to the appropriate location on a map. These observations were later digitized in TNC’s mapping records.

According to Nettleton, hearing from the community has been one of the most valuable aspects of his Commonwealth Fellowship experience. Nettleton studied concepts like marsh migration in his environmental science master’s program at Virginia Commonwealth University, but the workshop allowed him to hear from homeowners who have marsh plants encroaching on their yards. Organizing these workshops also helped connect TNC to regional organizations like the Planning District Commission and local leaders and citizens.

“Our hope is that through this fellowship, I’ve been able to facilitate all these conversations and bring all these partners together,” Nettleton said.

Nettleton studied concepts like marsh migration in his environmental science master’s program, but the workshop allowed him to hear from homeowners who have marsh plants encroaching on their yards. 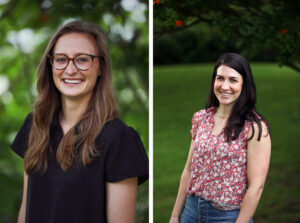 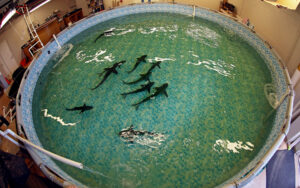 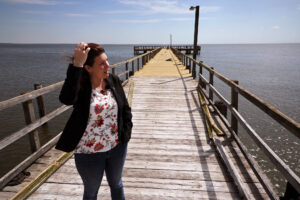