Societal challenges due to sea level rise aren’t confined to any one discipline, and solutions shouldn’t be confined to disciplines, either. But solving these problems with professionals in different fields—like science, policy, engineering, architecture, and urban planning—requires effort to understand and incorporate everyone’s unique approaches.

In order to equip graduate students with the skills needed to tackle transdisciplinary problem-solving, Virginia Sea Grant led a series of Team Science workshops. The workshops were funded through a National Science Foundation grant for innovations in graduate education, in collaboration with researchers from the Virginia Institute of Marine Science, Virginia Commonwealth University, University of Central Florida, and University of Virginia.

The goal of the workshops was to improve graduate students’ teamwork skills needed for collaborative problem-solving. Two multi-day workshops were held in October 2018 and March 2019. Students in science, engineering, architecture, policy, planning, and education programs worked together in small groups to develop research proposals that address specific coastal challenges.

Two representatives of the Team Science training, Justin Shawler, a student participant, and Stephen Fiore, a professor of cognitive science at the University of Central Florida and co-lead on the NSF grant, presented about the Team Science training to an international audience of interdisciplinary researchers at the 2019 International Transdisciplinarity Conference in Sweden.

“Students had done the pre- and post-surveys for Team Science training, so Steve presented some of the early results from that,” Shawler said. “Then mine was a combination of presenting the conceptual framework my team came up with and what it was like as a grad student to go through Team Science training and the lessons learned along the way.”

During the Team Science workshops, Shawler’s group focused on the impacts of sea level rise for the Town of Chincoteague on one of Virginia’s populated barrier islands. Shawler’s team generated a research proposal that focused on stormwater management for the town.

The student team developed a conceptual framework—a visual diagram that sketched out their thoughts about a particular topic—in this case, resilience. From their own drawings, maps, diagrams, and bulleted lists, the team put together a diagram that incorporated all their different perspectives on resilience. Shawler described this process for other transdisciplinary researchers at the interdisciplinary conference.

“We had to get from the point where we all had these individual ideas of what resilience looked like to one we could all agree on and that we co-developed as a team,” Shawler said. “But to get to that point, we really had to have a lot of discussion and debate.”

Shawler’s presentation of his Team Science experience sparked discussions at the conference about the importance of mentorship as students learn to collaborate across disciplines—and follow-up questions about the proposal the team developed.

“People were certainly very impressed based on the questions,” Fiore said of Shawler’s presentation. “They were asking questions about the applicability to other kind of coastal systems and they were asking about the next steps and plans.”

While the students developed their conceptual frameworks and research questions, a team of researchers evaluated how the team dynamics and the students’ collaborative skills changed over the course of the workshops.

The researchers looked at four main categories: the teams’ ability to communicate, adapt, educate, and relate to other teammates. The students completed surveys throughout the workshops, which the researchers used to assess the students’ collaborative skills.

Shawler said the Team Science workshops sparked an interest in careers that would allow him to interact with lawyers and engineers.

“Everyone had such different perspectives,” Shawler said. “I thought more about how my science relates to urban planning and that sort of thing in those two days than I have in three years of being in grad school.”

“The exciting part for me, and the primary reason that I wanted Justin and the students to present, is that we wanted to document how well students can learn to work across disciplines,” Fiore said. “The grant’s goal was to improve their collaboration skills as interdisciplinary scientists. But out of this, we are able to show that they produced, not simply answers for some laboratory project, but genuine scientific solutions relevant to sustainability science needs around the world.” 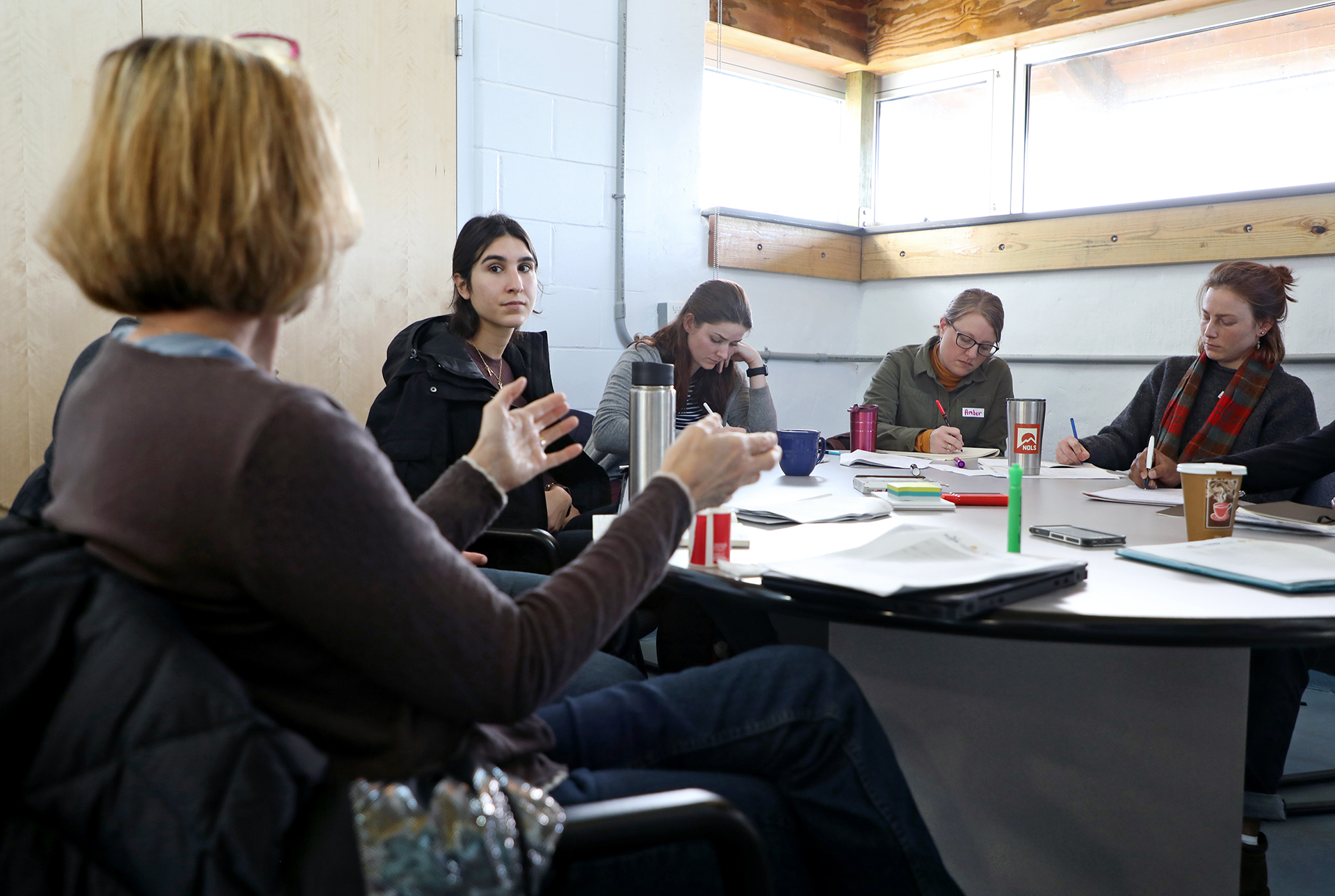 “Everyone had such different perspectives,” Shawler said. “I thought more about how my science relates to urban planning and that sort of thing in those two days, more than I have in three years of being in grad school.”